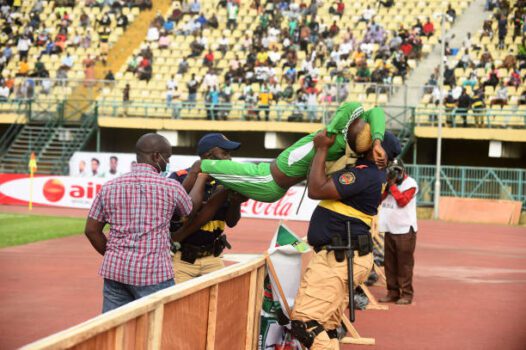 A pitch invader joined the Super Eagles in celebration, by the corner flag, after Victor Osimhen scored the game’s opener against Lesotho in the Africa Cup of Nations qualifiers.

Despite the measures taken to manage the small crowd admitted into the grounds of the Teslim Balogun Stadium, the invader expertly avoided the security, crouched behind the advertising boards until the first goal of the game.

It appears the Man, who is yet to be identified, wanted a chanced meeting with Osimhen, but he was whisked and in company of a child, according to eye witness outside the grounds.

Recounting the scenes of Tuesday’s invasion in a social media post, a fan simply named Endurance described the scenario:

A quick one on this dude that entered the pitch.

He was squatting with the ball boy behind the Lesotho goal post in the first half.

Immediately Osimhen scored that goal, he jumped onto the pitch to the corner where the players were celebrating with osimhen and fell to the feet of Osimhen, opened the banner in his hand that has Osimhen images and some write ups before security agents swooped on him and whisked him away.

He was being mal-handled right there and the spectators had to raise their voice before he was taken away. Immediately after the first half, I walked out of the main bowl and I saw the guy handed over to a police DPO and was dragged to a waiting KAI van.

Interestingly, he was with his son and while they were putting him in the van, his son (a boy of about 5-years) screaming and shouting holding a ball with him. He was also put in the van along his dad. [sic]

Security personnel used guard dogs and applied brute force outside the gates while fans trooped in before kick off, the experience according to some was “traumatic”.

Lagos hosted its first Super Eagles match for the first time in a decade.

The post A Child and Pitch Invader who Celebrated with Osimhen Arrested by Police at the Teslim Balogun Stadium appeared first on Latest football news in Nigeria.

There is a buzz of excitement in Ekiti state as it is set to welcome 16 football teams from Kwara and different states in South- West Nigeria,