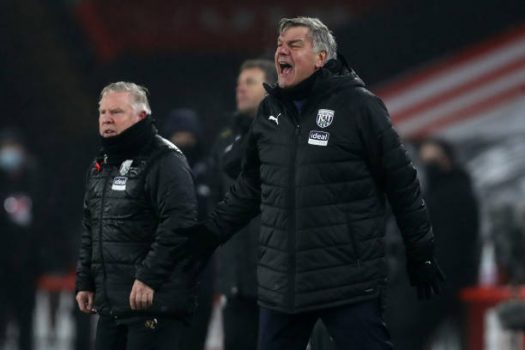 Sam Allardyce was a breath short of throwing his entire team under the bus, but specially criticized the team’s defence.

Semi Ajayi’s Center Back partnership with Kyle Bartley and the entire defence line have conceded 52 goals this league campaign – the most by any team in England’s top four leagues.

West Brom took the lead through Matt Phillips (41′), but the defence had an off day and the hosts found their way back into the game.

First the leveler in the 56th minute (Jayden Bogle) before Billy Sharp (73′) struck the dagger that ensured the Blades keep their survival hopes alive.

The Baggies’ Manager wasn’t impressed with his old players and demanded improvements.

The Club had acquired four new players in the January transfer window and Allardyce argues that can inspire the team’s revival.

“The players have to look at the boys coming in and the quality they’ve got,” the Club’s website quoted the Manager.

“Robert Snodgrass will get better as he keeps up his match fitness, and the big man [Diagne] scored 11 goals at Galatasaray so hopefully those things will start to come to fruition very quickly.

“Okay in midfield is strong, good on the ball, passes well and will protect the back-four which is a necessity for us at the moment.

“We’ve got to get those four up and running as quickly as possible so they can help the boys here at the moment deliver better performances.

“I’m trying to stop us conceding goals from how we’re setting up in the sessions in training. But the lads have to concentrate for 90 minutes and make the right decisions and we have to keep working on that.”