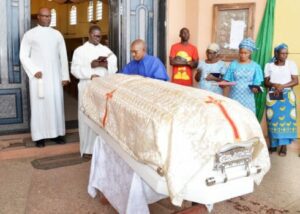 It was a day full of emotions, fun, thrills, and paparazzi, as adorable, kind-hearted woman leader, socialite and lady of substance from Ubulu-Uku, Aniocha South Local Government Area, Delta State, Mrs. Josephine Adaolie Oji, nee Mukolu, was laid to rest. She was celebrated by family, friends, and well-wishers, who paid their last respects, on Thursday, December 31, 2020.

The great ‘Lioness,’ fondly called Mama Ojunwa, was eulogized by her friends, political bigwigs, associates, and admirers in an electrifying carnival atmosphere as she joined her ancestor.
A pious Roman Catholic, Mama Josephine Adaolie Oji, beloved mother, grandmother, and great-grandmother, who ended her earthly sojourn on November 8, 2020, at the age of 93, was said to have followed her heart when she got married to her heartthrob and popular teacher, Pa Paul Okolie Oji, and wedded in August 1950, at Ogwashi-Uku Catholic Church.
The charming, elegant and beautiful woman, who was then known as Grace, deviated from her course as an Anglican Communion adherent and took up Catholicism immediately after her wedding and delved into the Catholic Church, where she weathered all storms of life and surmounted trials to become a successful woman and the envy of her compatriots.

Her life story of success, going from grass to grace, was a reference point and a major reason that endeared her to her friends.
Some of the children she left to mourn her are Charles Adim Oji, Emmanuel Oji, Christopher Oji, Mrs. Felicia Ayogbe, Pastor Joseph Oji, Tony Osadebe Oji, Mark Chidozie Oji, Patrick Sunny Oji, Uche Oji, and John Paul Christopher Oji. The funeral commenced with a service of songs at her late husband’s compound in Onicha-Uku quarters, Ubulu-Uku, by 5 pm, on Wednesday, December 30, 2020, while interment took place on Thursday, December 31, immediately after a requiem Mass officiated by Very Reverend Father Augustine Ohanwusi, who was assisted by Reverend Innocent Onyeogo, at St. Charles Boromeo Catholic Church, Mission Road, Ubulu-Uku. Top on the List of frontline friends, bigwigs and organizations that graced the occasion and celebrated the adorable woman was a high-powered delegation of the Crime Reporters Association of Nigeria, CRAN, led by the president, Mr. Sunday Odita, of The Guardian Newspaper, Prince Albert Uba, a publisher, Eugene Agha of Daily Trust Newspaper, Ismaila Oguntade of Leadership Newspaper, Hyacinth Beluchuba of Oriental News, Taiwo Jimoh of New Telegraph Newspaper, Adaobi Mourine Obiechina of NTA and DSP (supernumerary) Emmanuel Edom, publisher of News Planet International Newspaper, editor, Peoples Star Online News, And editor, The Lead News Reports.

Others were top politicians like Mrs. Joan Amaechi Mrakpor, a former two-term member of the Delta State House of Assembly, member of the House Of Representatives, and incumbent director-general, Delta State Development Agency. In his welcome address, Christopher Oji, former president of CRAN and current assistant news editor of The Sun Newspaper, expressed the Oji family’s appreciation to CRAN and other guests. His words: “I sincerely appreciate all those who honoured our mother’s burial ceremony. I appreciate Mrs. Joan Amaechi Mrakpor for the honour bestowed on the Ojis. It is not easy, with her tight schedule, to spare the time. I can’t appreciate you enough. Well, there is no way a top person like you will pay a visit to my place in Ubulu-Uku/Onicha-Ugbo road without me requesting that you take up the matter of the dilapidated state of our road to our Governor, Senator Ifeanyi Okowa. Please, the governor has promised to do the road for us. You managed to pass through the road because of our efforts as a few families from Onicha-Uku quarters contributed money to sand-fill the road. 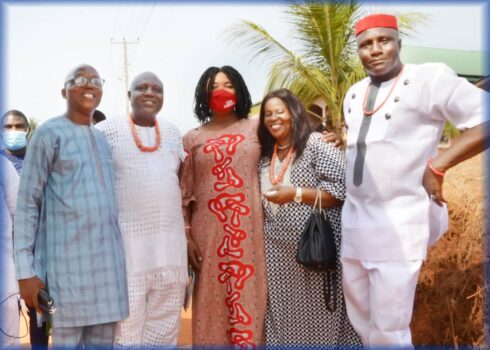 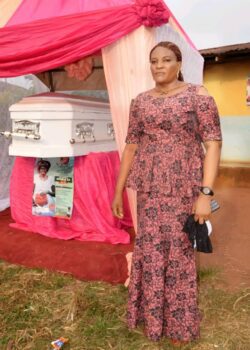 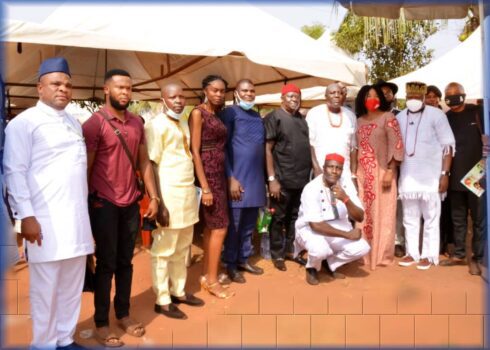 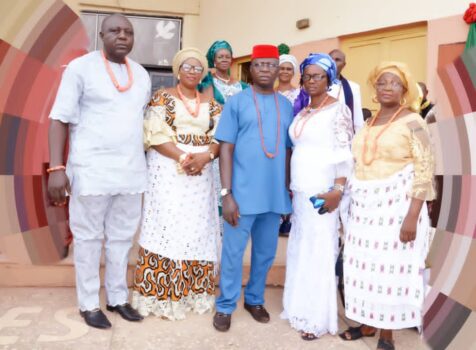 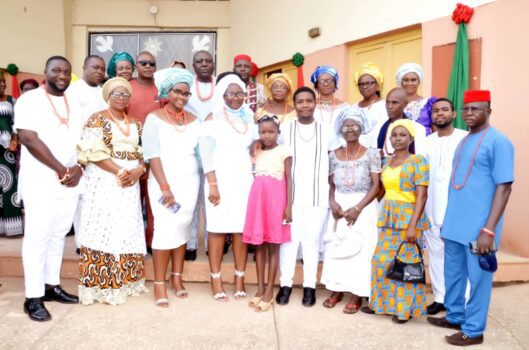 “We are appealing to you to help us remind the governor of his promise to do the road in 2021.”

Responding, Mrakpor, who described Christopher Oji as a renowned journalist, said she would not have attended the event if Oji was one of those journalists “who do not confirm their stories before going to the press.”
“I respect Oji because he will always balance his stories before publishing,” she said. “I am not speaking to the Fourth Estate of the Realm alone. I am talking to all and sundry. Let us shun gossip and rumour peddling. We should criticize people constructively.
“As for the Ubulu-Uku/Onicha-Ugbo road, the governor has promised to do it. He is an action governor; he will do it. I want to use this opportunity to also observe COVID-19 protocols; social distancing is very necessary. May God continue to protect us and grant Ma Oji eternal rest.”
During his homily, Fr. Emmanuel Dibia, who was flanked by Monsignor Meritus Eze and other priests, described Ma Josephine Oji as a dedicated Catholic who lived a virtuous life.

“She used to read her rosary regularly and brought her children up in the Christian way. I want the children and other relatives to be consoled with the promise of our Lord Jesus that on the resurrection hour, the dead will rise again. This world is not our home but a passing road. We shall be judged according to our deeds on earth.”

Lamenting, Mr. Charles Oji said their mother would be missed greatly: “She was a loving mother who trained us in the Christian way. We know that she was old enough but it is not easy as people think.”
Mr. Emmanuel Oji, who works at the Presidency, Abuja, said the lesson from his mother’s burial is that “we should live a good life and leave our legacy behind.” “Everybody is still talking good of my father, Mr. Paul Okolie Oji, who passed on about 16 years ago. They are still extolling his good virtues, which they credited with moulding our mother’s life. My mother’s burial has taught me to be of good character. She lived a virtuous life; a philanthropist in her little capacity, as she gave to all and respected everyone who came in contact with her. She was a good cook. So, most of the people who you see here today have been affected one way or the other by Mama. She was the stoic, blunt, and understanding person who would not intrude into other people’s private matters, including marriage issues. Every Christian should learn from her good lifestyle.” Incidentally, the musician, Sir Goro, who thrilled the visitors during the burial, sang that the world is not really our home. Most of the sympathisers did not only celebrate the life and times of Ma Oji, but they also joined the rest of the family to celebrate and exhibit exotic dance steps.

Food and drinks were not in short supply, as the ever-smiling hosts ensured that every guest was comfortable and had enough to eat.
Earlier, the CRAN president, Odita, had presented gifts from the association and Delta State journalists to Mr. Christopher Oji, who expressed appreciation to the groups.