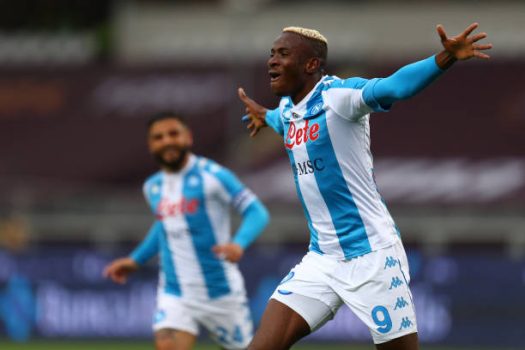 Victor Osimhen scored his 7th league in Serie A this season, the €70 million summer acquisition netted the match-winning goal in Napoli’s 2-0 win over Torino to boost his side’s UEFA Champions League ambitions for next season.

Osimhen, 22, has endured a tough start to life as a Parthenopean, dealing with a length injury and then COVID-19.

But on Monday, the young Forward was on top of his game, doubling the lead for Napoli after Tiémoué Bakayoko’s opener.

The Nigerian has kept up an impressive goal scoring form in April, last night’s goal being his 4th in six games.

Monday’s victory moved Gennaro Gattuso’s men a place ahead of Juventus in third, albeit tied on points.

They can climb to second spot with just two points separating them and Atalanta.