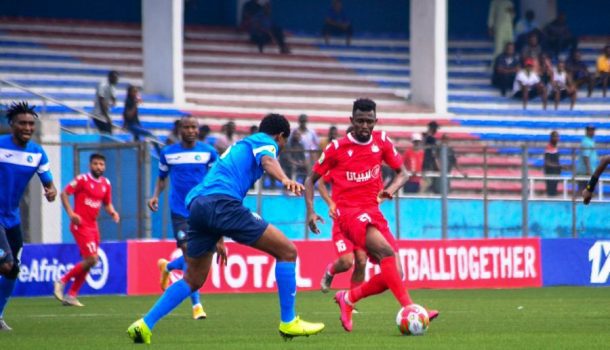 Muttasem Ballah El Taib’s first half strike decided the tie between Al Ahly Benghazi and Enyimba in the penultimate group A game in the CAF Confederation Cup.

El Taib scored in the 40th minute, breaking through a resilient Enyimba defence to give his side a shot at a quarter-final spot.

The NPFL side were reduced to 10 men in the 74th minute after Timothy Danladi was giving his marching orders, but Enyimba managed to keep their hosts at bay and settled for the odd goal defeat.

FT | It ends in Benghazi

Fatai Osho’s men have now dropped to third in the group, with 6 points while Ahly Benghazi move a place and a point ahead of the People’s Elephants.

It now becomes imperative for Enyimba to win their final group game against Orlando Pirates to stand a chance of reaching the next round of the competition.

The post Enyimba on the brink of Confederation Cup Elimination after 1-0 defeat to Ahly Benghazi appeared first on Latest football news in Nigeria.