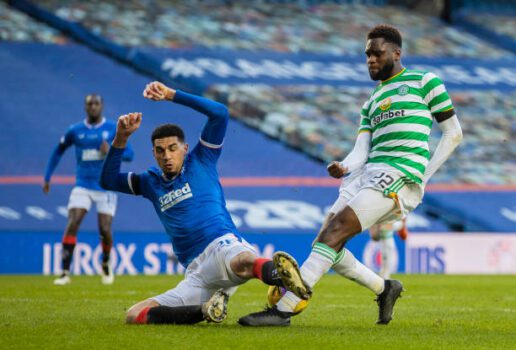 Former Rangers star Alex Rae says Leon Balogun has been a success at the Ibrox this season and praised the club for signing the Nigerian.

Balogun returned to the team that defeated Celtic in the Old Firm derby on Saturday after sitting out of Rangers’s win over St Mirren last weekend.

The former Mainz 05 defender is an important part of Rangers defence that has kept 18 clean sheets in the Scottish premier league this season.

Rangers seated 19 points clear at the top of the Scottish Premiership table and also booked their place in Europa League last 32 with Balogun as an integral part of the success.

Rae said, Balogun has made a huge impact since arriving at the club and he was full of praise for the recruitment department for bringing him to Ibrox.

“You know the thing about Balogun, when you consider this guy came into Rangers on a Bosman,” Rae said on Rangers’s Ten10Podcast.

“Some of the recruitment for Rangers has been nothing short of tremendous.

“When you look at the valuation of these guys, I would say there’s so much value in the team as opposed to four or five years ago.

“Balogun has been a terrific, outstanding addition because he brings power and pace to the backline,” he said.

Balogun joined Rangers on a free transfer last year after a good season with English side Wigan Athletic.

President of the Handball Federation of Nigeria Sam Ocheo has urged players, coaches and all other handball stakeholders in Nigeria to tap into

Atletico Madrid manager Diego Simeone has seen off competition from the likes of Pep Guardiola, Zinedine Zidane and Jose Mourinho to be declared

By Samuel Bamisebi Talent abides in Nigeria a lot and as such, a goalkeeper with experience decided to bring other young and talented goalkeepers

Midfielder Nzube Anaezemba says Abia Warriors need to start getting results as soon as possible after a poor start to the 2020-2021 NPFL season.

Hot on the heels of report linking Nigeria international midfielder Wilfred Ndidi with a move away from Leicester City to PSG,

Rivers United Coach, Stanley Eguma praised his players for living up to expectations following their impressive win over Kwara United in a NPFL

Five-time U 17 world champions, Golden Eaglets of Nigeria landed in Lome, Togo, ahead of the West African Football Union (WAFU B) U17 Tournament

Salisu Yusuf not worried about Rangers lack of goals

NPFL 2020/21: We Needed To Win To Raise Our Morale And Confidence – Stanley Eguma…Says He Expects A Good Result Against Abia Warriors

DJ Cuppy, Do2dtun and Infinix Dancers Lit up Turn Up Friday with Infinix

St. Mirren 0-2 Rangers: Good day in the Office for Aribo

Iwobi does it all in Everton win against Struggling Sheffield United