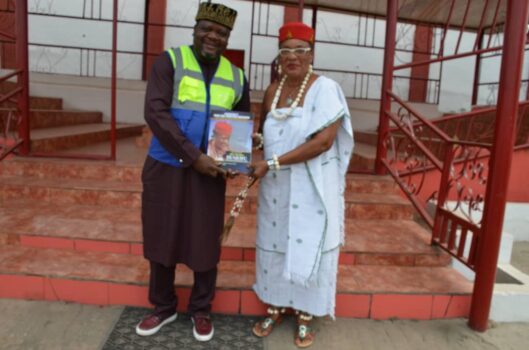 The Odita Sunday Charity Foundation (TOSCF) has said that the Omu Anioma Palace Okpanam should be listed among the Delta State Tourism Destinations, describing the traditional ground as depicting what the Aniomas is known for culturally.

The clarion call was made Saturday 27th February 2021, when the Founder/Proprietor of the Foundation, Mr. Odita Sunday paid a courtesy visit to the Queen Mother to lend his moral support towards what she is doing to promote Anioma culture worldwide.

The journalist who equally doubles as the National President of Crime Reporters Association of Nigeria (CRAN), said that Omu Dunkwu is just an awesome Godsent intelligentsia for the people of Anioma, Delta, and Nigeria in general.

Odita was marveled at the ambiance and aura being exhumed within the Palace and as an Image Maker par excellence, he called on Delta State Government to enlist the Palace as one of the Tourist Attractions in the State, positing that it is capable of generating revenue for the Government as people would often want to visit.

His words, “Elsewhere, people will hastily take advantage of this Palace and turn it into a world-class tourism destination.

“We of Anioma extraction indeed have a tourist asset in Omu Anioma as a person, and again, the Palace is traditionally awesome and befitting for cultural tourism.

“As a Public Relations practitioner, I can see huge prospects in this traditional arena and I make bold to urge the Government to maximize the potentials of the Palace”,

Responding, Omu Anioma commended Odita Sunday for visiting while appreciating him for his modest assessment.

Omu Dunkwu said if we have more of young and progressive Anioma children like Odita, there won’t be a need to bother knowing fully well that her vision and dream for a super great Anioma Nation would be achievable.

The US-trained Media and Communications guru eulogized Odita Sunday for being one of the frontline journalists to reckon with in Nigeria.

She further commended Odita Sunday for his Charity Foundation which has continued to sincerely empower widows in Anioma and provide scholarships to our children through the Back To School Programme.

The Nneoha (Mother Without Bordgers), however, assured Odita Sunday of her ever-ready support to ensure the mission of the Foundation is realisable and sustainable.

Navy cautions over misinformation on piracy in Gulf of Guinea