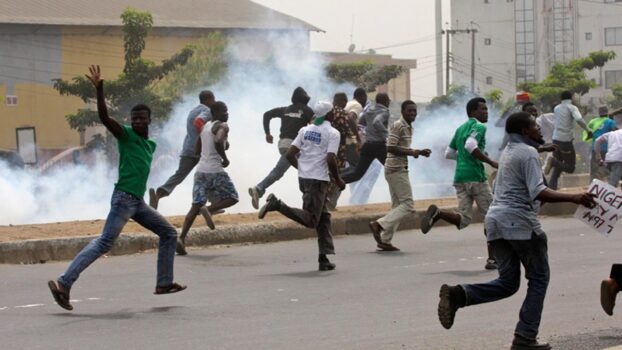 The incident occurred at the wee hours of Thursday along Akai Effa-Idundu Road in Calabar Municipality at about 2:00 am.

A witness, Okon Asuquo, who lives within the Akai Effa community, said: “We heard sporadic gunshots between 1:00 am-2:00 am which were later followed by movements of commercial Motorcycle (Okada). We were surprised because for quite a while the area was calm.

“Then I woke up and tried to call some neighbours who also confirmed that there ware a sound of gunshots. So we waited till 5:00 am and we strolled to the roadside where we heard the gunshots and then we saw four policemen lying dead with bullet wounds all over their bodies and two rifles on the ground.

“When I further made enquiries from a neigbhour who lives by the roadside, he said hoodlums struck the police checkpoint and killed the policemen on duty.

‘He said though he could not really fathom out who must have carried out such a dastardly act, but that he was suspecting that it is the handiwork of suspected kidnappers the state.

He said residents now live in fears as they don’t know how police would react to the ugly incident.

Police Public Relations Officer, (PPRO), DSP Irene Ugbo, said:” It is quite unfortunate and we feel really sad and in mourning mood about the death of the four officers who lost their lives.

“We are investigating the matter and will surely fish out the culprits no matter how far they run or hide, we must get them arrested, that I can assure you,”

In a related development, Operation Akpakwu has arrested five suspected robbers who have been terrorising the Ikot Ene community in Akpabuyo Local Government Area.

Sources close to Operation Akpakwu base revealed that the five-man gang were nabbed about 11:00 am today when they got a distress call that some hoodlums were operating in one of the youth leaders’ house.

Akpakwu had responded immediately and arrested them while they were trying to escape.

It was learnt that one of the suspects had, during an operation yesterday morning at Ikot Ene, killed the wife of Bassed Edem, when she was going to the market early morning.

Edem in a chat with Journalists in Calabar said: “My wife went for her normal early morning g market, on her way, the hoodlums attacked her and disposed her of cash and later shot her dead.

He said witnesses revealed that his wife tried to struggle with them and in anger one of them shot her in the right chest and she died, adding that her body has been deposited at the mortuary in Akpabuyo.

Navy cautions over misinformation on piracy in Gulf of Guinea

2 feared killed, many injured as hoodlums clash in Lagos community

2 die, many injured as rival cult groups clash in Lagos