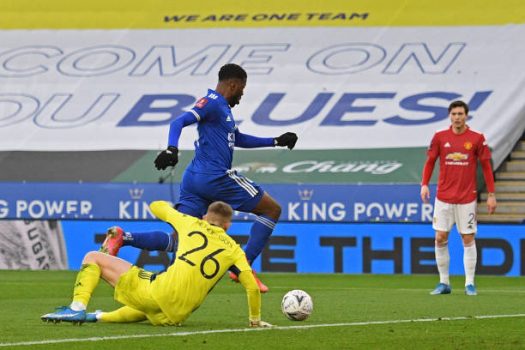 What a denouement to the current campaign Kelechi Iheanacho is having at Leicester City; Weekly jaw dropping performances that have both elevated the team and his own status.

The Nigerian had seized the opportunity, to start as a regular, by the scruff, chipping in when almost inexplicably the rather more reliable Jamie Vardy has looked all but out of sorts.

Since the turn of the year, simultaneously marking the turn of his fortunes, Iheanacho has scored an impressive 10 league goals – in 12 games.

Goals that have contributed 16 points (5W, 1D) in total, only once did Leicester lose during that run.

Overall he has netted 17 times from 33 appearances in all competitions this season. It’s an improvement from his best season’s performance back in 2015-16 where his 35 appearances saw him score 14 times.

Clearly, he has improved some, albeit it has also taken a while; two substantive and two interim managers long.

The grind under Brendan Rodgers had also started quite slowly and had at different turns been frustrating.

But none seem happier than the Northern Irishman, who backed the 24 year-old for a new contract in March.

While his goals have impacted the Foxes’ UEFA Champions League push, they have certainly been the driving force for the club’s tremendous run to the FA Cup final.

In particular, his man of the match performance against Manchester United in the quarter final and lone strike in the semi final against Southampton gives Rodgers hope of a silverware this term.

The poacher’s latest victim, Crystal Palace watched helplessly as an assist and goal from Iheanacho guided Leicester to a 2-1 comeback victory.

“I think when you have confidence in the game it makes you perform really well and give your best as well. When you score a goal it gets your mind high and it keeps coming and you keep scoring,” Iheanacho said after the game.

The post How Good has Kelechi Iheanacho really been for Leicester this season? appeared first on Latest football news in Nigeria.