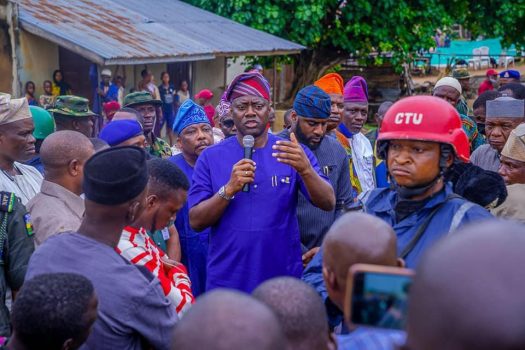 Following the gruesome murder of nine men, one woman, and a child in Igangan, in Ibarapa zone of Oyo State, by gunmen suspected to be criminal herdsmen, last Saturday night, Governor Seyi Makinde has reassured the state that his administration is readjusting the security architecture of the state with a view to responding to the current situation of kidnapping, banditry and other forms of criminality across the state.

He gave the assurance,Thursday, in the ‘State of the State address he presented on the second anniversary of the Oyo State Ninth Assembly, held at the parliament chambers, Agodi, Ibadan.

The anniversary, which was presided over by the Speaker, Adebo Ogubdoyin, was also attended by the Deputy Governor, Rauf Olaniyan, and top government functionaries as well as the state chairman of the ruling People’s Democratic Party (PDP), Alhaji Kunmi Mustapha.
Makinde said:

“We are determined to ensure that such an attack will not repeat itself again. For this reason, we are adjusting our security architecture to respond to our current situation.”

Makinde, who noted that in spite of security challenges, his administration has continued to “prioritize the security of our people. In the past year, we have operationalised the Western Nigeria Security Network, codenamed Amotekun. We held the passing out parade of 1,500 corps members and deployed them to all 33 local government areas of Oyo State. We set up a Security Task Force, which meets weekly to assess security threats and proffer solutions that would work for us.

“We have strengthened our security architecture by expanding the operations of the Security Control Room and City Watch facilities at the Oyo State Security Trust Fund Headquarters, Onireke, Jericho, here in Ibadan.

“Right now, we can monitor activities at Mamu Village, on the Oyo/Ogun States border, where we set up a Security Joint Force Base. We also supported federal security operatives by providing operational vehicles, communication gadgets, bullet-proof vests, and other security equipment to facilitate their work.”

Makinde said his government christened 2020 as the year of continued consolidation, adding:

“This is because we continued to build on the gains of our first year in office. We have not deviated from our Roadmap to Accelerated Development in Oyo State 2019-2023. And so, our administration has continued to focus on the four pillars: Economy, Education, Healthcare and Security.”

30 killed by suspected herdsmen in Benue