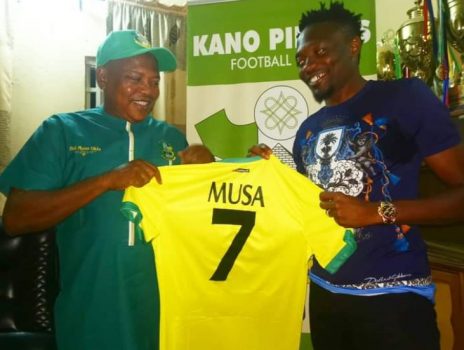 Fans of Kano Pillars should not expect a great deal from the second stint of Ahmed Musa at the club, because the footballer is in his twilight, so says former Nigerian midfielder Garba Lawal.

Musa agreed a short term deal to rejoin Pillars, 11 years after he left the club as top scorer of the League.

However, while the fairytale return will give the NPFL and Club image boost, the 28 year-old’s performance might not impress many Lawal has suggested.

Speaking on Brila FM’s show “No Holds Barred with Ifeanyi Udeze”, the Ex Super Eagles, who earned 57 caps, said fans should not expect “Magic” from the Marquee signing.

“At his age now; he’s aging, we don’t expect to see the Ahmed Musa of five, six or seven seasons ago. If they expect that, I believe it will not happen because football is all about time.”

Ahmed Musa To Play For Kano Pillars For Free, Donates Bonus To Orphanages