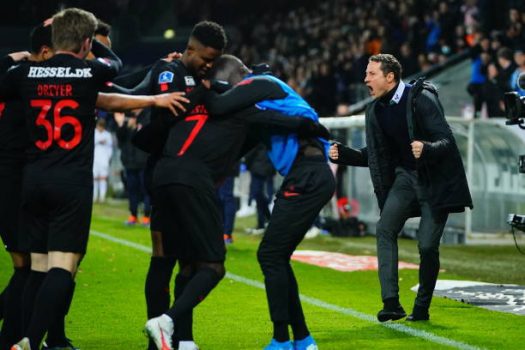 FC Midtjylland maintained their unbeaten start to the Superliga Championship playoff games as they marched past FC Copenhagen 4-1 on Thursday.

With over 4000 fans in attendance at the MCH Arena, Midtjylland put on a masterclass performance to consolidate their leadership position on the table.

The hosts took a first half lead through Junior Brumado’s 25th minute strike. There would be no more goals in the opening half, but Midtjylland midfielder Frank Onyeka was booked for an untidy tackle.

Four minutes after the restart, Brian Priske’s side doubled their advantage with an Anders Dreyer goal.

It would be the turn of Pione Sisto to get in on the action and on the 56th minute he stretched the lead further.

However the visitors responded, reducing the deficit in the 71st minute as they looked to launch a comeback.

But it would not happen, 10 minutes later Midtjylland restored their three goal lead as Lasse Vibe found the back of the net.

Nigeria international Frank Onyeka did not play the entire duration of the game as he was subbed off before the hour mark for Awer Mabil.