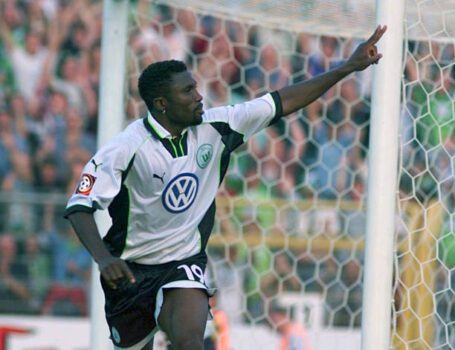 Former Nigerian International Jonathan Akpoborie has held The United Nations Children’s Fund (UNICEF) and the government of Benin Republic accountable over his vandalized vessel, MV Etinero, in a scandal that also ensured his maritime business crashed.

Akpoborie, who spent the entirety of his career in Germany, insists the UNICEF were the primary source of the rumor that scandalized his football career and business.

“They led many to believe that my vessel, MV Etinero, from Cotonou was transporting 250 children  into slavery,” he said.

Akpoborie, who was part of the first Nigerian U17 side that won the world youth championship in 1985, also went on to represent Nigeria across all levels.

It was during his time at VfL Wolfsburg that the scandal surfaced and he explained the timeline of events during an interview on the radio show “No Holds Barred” with ex Super Eagles Ifeanyi Udeze on Brila FM.

“When I got to Stuttgart I got two ships a cargo and a passenger ship. They ply Lome, Cotonou and Libreville; at one point we used to convey refugees for UN from Monrovia, one of the vessels is about 500 tonnage and we’ll convey 700 passengers or 40-50 trucks, 40ft containers. So, the sister vessel (MV Etireno) in Monrovia caught the attention of the locals because it flew a Nigerian flag.

“Those people were bent on spreading rumors about the vessel and UNICEF jumped on the rumor and told BBC that a vessel from Cotonou was carrying 250 children, who would be sold into slavery.

The organization issued a search alert, at that point the vessel was in Libreville. Government officials and UNICEF representatives inspected the vessel in Libreville and testified they found nothing. The authorities in Gabon then instructed that the vessel return to Cotonou; with all that was on board.

“Police in Douala inspected the vessel on arrival and found only the passengers who were on board heading to Cotonou.

But, UNICEF at his time had also led the public to believe kids were thrown overboard, and that lie inflamed many as well as exacerbated the initial rumor during this time an investigative crew came to Nigeria and discovered I owned the vessel that’s when the story was published in Europe that my vessel was transporting 250 kids who would be sold into slavery,

“When the vessel got to Cotonou, I was in Wolfsburg, watching live on CNN it was 2am. The first question the CNN news crew asked the UNICEF official was, the whereabouts of the 250 kids reportedly being transported on the vessel.

“Her response was that they had mistaken the vessel for another one, that’s what UNICEF said. So, I’m concluding they just spread the lies to tarnish my business and image,” said the former Nigeria International.

He also revealed how the government of Benin Republic refused to release the vessel, which was later vandalized, only because it was flying a Nigerian flag.

“As I speak the Beninoise government did not release my vessel, but when they eventually did, they released it into the sea. It drifted into a beach and it was vandalized by scavengers.

“I dragged them before the Courts in the Country; I went to the Court of Appeal and Supreme court and won the case, the final judgement was given in 2016. But the government failed to comply with the judgments and my entitlements have not been paid because I’m a Nigerian. They vandalized the vessel because it carried the Nigerian flag,” he concluded.