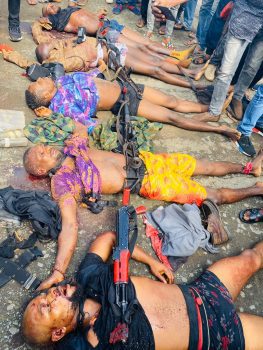 An Indigenous People of Biafra/ Eastern Security Network Commander and five assistance have been shot dead by the police in Imo State.

The Commander, an ex-Soldier and his gang who the police alleged to be responsible for over 70 percent of the killings in the Southeast met their death when they attempted to attack Imo State Police Headquarters for the second time at about 6 am.

The police said they recovered four Ak47 Rifles belonging to Police officers the IPOB members, led by Joseph Uka Nnachi(a.k.a Dragon) killed in two police Stations.
Other incrementing materials recovered from them were: six bombs, 2000 rounds of AK47 ammunition, Seven AK47 Magazines, two buses, one of them loaded with explosives.

According to a police source who spoke on the condition of anonymity: “The Joint teams of the Police and Army gallantly fought and neutralized the IPOB/ESN Terrorist after several minutes of fierce gun battle along Works Road, near the Police Headquarters.

“All the charms Dragon, a native of Ebonyi state and his group were using which they so much believed in have failed them once more.

“All the hailing Dragon and co were getting from the various viral videos in the social Media from natives as they were attacking police stations and killing police officers contributed to where Dragon and his group are today. He must have met all the innocent people he killed all over the Southeast by now”,