Police nab most wanted criminal, CJ others in Enugu

°°° Recover arms and ammunition in a building 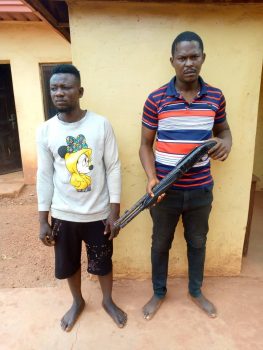 Enugu State Police Command has arrested the most wanted suspected robber, Chijioke Ijomanta(aka CJ) and his second in command, Benjamin Mela.
The suspects had been on the wanted list of the police for offences of armed robbery and cultism.

Also, the police recovered arms and ammunition in a building.
In a Statement by Enugu State Police Public Relations(PPRO)ASP. Daniel Ndukwe stated that:”Enugu State Police Command has successfully arrested two male criminal suspects for the offences of unlawful possession of firearm and cultism; recovered two firearms with ammunition of different calibres and one vehicle.

“On April 8, about 3:am operatives of the Command attached to Anti-Cultism Squad, arrested Chijioke Ijomanta (a.k.a CJ), 34, and Benjamin Mela,30, both residing at Isiagu Ugwuaji Community in Enugu South L.G.A. and alleged members of Vikings Confraternity cult group. Their arrests, which is due to revelations obtained in an ongoing investigation, led to the recovery of one Pump action gun. 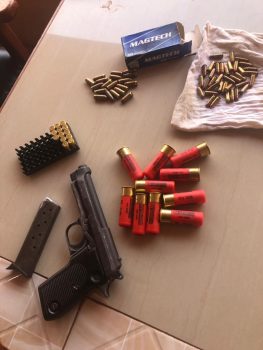 ” Similarly on April 4, at about 7:am, the same Police Operatives of the Command, conducted a search in a building at Nwakanwa Street in Independence Layout, Enugu, and recovered one English-made Berretta pistol with breech number: AO7815Z and the following rounds of different calibres of live ammunition: 13 rounds of .9mm, 19 rounds of 7.65, 36 rounds of .25mm special ammunition and 10 rounds of live cartridges. The recovery was due to the confessional statement of a suspect earlier arrested and is being investigated in the case of unlawful possession of a firearm and cultism.

“Also, operatives attached to 9th Mile police Division of the Command, April 1, recovered one Toyota Hummer Commercial Bus, belonging to Onitsha South Plus Transport Company, in Obioma Community of Udi L.G.A. The vehicle was recovered following the prompt response of the operatives to a report made by the driver on the same date that armed robbers snatched the vehicle from him at Enugu/Onitsha Expressway Bypass, 9th Mile. The hoodlums abandoned the vehicle and escaped, due to intense pressure made by the operatives to apprehend them and recover the vehicle.

“The arrested suspects will be charged to court on conclusion of the investigation, while discreet investigations are ongoing to apprehend others at large.

” Commissioner of Police, CP Mohammed Ndatsu Aliyu, while reiterating the unwavering commitment of the Command to weed out unrepentant criminal elements and their activities in the State, has commended efforts of the Operatives and charged them to sustain the tempo.

“He enjoins law-abiding citizens of the State to remain vigilant and continue to support the Command in the fight against acts of crime and criminality”.

Herders/clash will soon be history in Delta  – CP  Ali

Legendary England striker Gary Lineker has confessed his love for rave of the moment Kelechi Iheanacho, who banged in a wonder goal

What a denouement to the current campaign Kelechi Iheanacho is having at Leicester City; Weekly jaw dropping performances that have both elevated

Victor Osimhen scored his 7th league in Serie A this season, the €70 million summer acquisition netted the match-winning goal in Napoli’s 2-0 win

Every day, 1xBet, the massive betting website, improves. In this seemingly overcrowded market, the website available at 1xbet.ng/en/ is more than

President of the Nigeria Football Federation and FIFA Council Member, Mr. Amaju Melvin Pinnick has heaped plaudits on the Chairman of the Nigeria

Simeon ‘Simy’ Nwankwo continued his impressive form in front of goal as he netted a brace in Crotone’s 4-3 win at Parma, in the Serie A on

Onuachu One Goal Away From Matching Genk Goal Record For A Season, Nets Goal Number 29

Ahmed Musa To Play For Kano Pillars For Free, Donates Bonus To Orphanages

Athletics at the National Sports Festival was highly encouraging