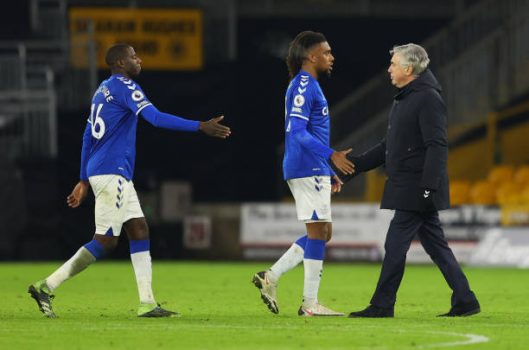 Everton went into the game without their forwards Dominic Calvert-Lewin and Richarlison, but Iwobi and Michael both scored to give Ancelotti the needed win.

Iwobi gave Everton the lead with six minutes into the match but a Ruben Neves volley restored parity for Wolves.

Michael Keane handed the Toffees the three point late on in the game.

After the game, the Everton boss was full of praise for his boys, especially Alex Iwobi and Lucas Digne for how they combined for the first goal.

“The players adapted really well. The position of James Rodriguez and Gylfi Sigurdsson created problems for them. We adapted well to the characteristics of our players and at the back we were focused. All the back four were fantastic.

“We had a different approach without Richarlison and Calvert-Lewin. We played more to attack the flanks with Iwobi and (Lucas) Digne and it worked well because the first goal was a fantastic combination.”

3 very nice points to keep us up top. pic.twitter.com/JS1vgjX32s

Everton will be back in action on Sunday but their game with Aston Villa could be postponed due to the Covid-19.