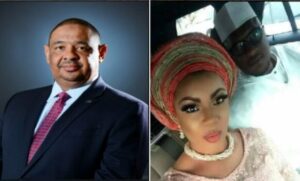 The Managing Director of First City Monument Bank (FCMB), Adam Nuru is currently enmeshed in a sex scandal as a group known as JUSTICE FOR TUNDE THOMAS has launched a petition on change.org calling on the Central Bank of Nigeria (CBN) to sanction the banker over what they described as indecent behaviour.

The group alleged that the banker was responsible for Tunde Thomas’ marriage breakdown that eventually led to Tunde’s death a few days back.
The story as posted on the website read:

“Tunde Thomas died recently like about a week or two from depression. Apparently, kids from his marriage to Moyo Thomas belong to his wife’s boss (Adam Nuru, the current MD of FCMB). Moyo Thomas left Tunde to go to America with the kids, she told him kids were not his when she got to America. He (Tunde) was later down with stroke but recovered.
Apparently, Tunde met someone else he was going to remarry but apparently didn’t recover from the first Marriage issues. Tunde was just made director for the MFB he works for. Got back from work last week and had a cardiac arrest 2 days before introduction to a pregnant new girlfriend.
This is a case of gross misconduct based on ethical grounds and unjustifiable economic oppression by the elites (Adam Nuru) against the less privileged in the society. The MD has been doing everything possible to sweep this case under the carpet. We implore the Central Bank of Nigeria as the apex regulator and the board of FCMB to investigate this for the integrity of the bank and Nigerian banking industry. This is a case too many, while I agree that this is not the full story, the minimum will be an investigation into this unethical conduct by the current MD of FCMB Bank Adam Nuru”

In a bid to get justice for Tunde Thomas, over 1,000 people have so far signed a petition to compel the Central Bank of Nigeria and the board of FCMB to sack its managing director, Adam Nuru.
Adam Nuru, who was said to have impregnated a married woman twice is currently running from pillar to post to save his job.
The woman, Moyo Thomas, nee Ojo, confessed her extra-marital affairs to her husband Tunde Thomas after she escaped to the U.S, where she is now seeking asylum.
The deceased, who thought the two kids of the marriage belonged to him, died of depression and a heart attack on 16 December, some days before introducing another woman to his family.

Tasksforce warns against one way, sets to arraign 60

Mrakpor To Seek Legal Action Against Journalist For Defamation Of Character

How Okada rider raped, forced me to swallow sperm – Student