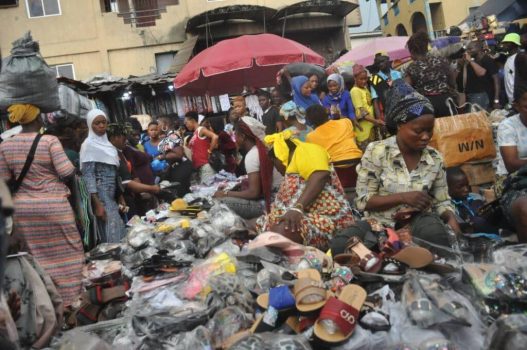 There was pandemonium Yesterday at the Agege area of Lagos as an angry mob set ablaze a suspected kidnapper while one was rescued by the Police.
It was like a war situation when the police attempted to rescue the Kidnap suspects as the mammoth crowd engaged the police and pelted them with stones and other dangerous weapons, but the police were able to rescue one of them.

It was gathered that two occupants of a White Golf car were seen loitering around at Mulero Bus stop Agege area of the State and the residents who suspected that they were kidnappers raised the alarm which attracted some motor touts who attacked the occupants and other passersby joined in the attack.
A witness Felicia Maduagwu, said:” You know there have been rumors making the round that kidnappers have invaded Lagos, so people are apprehensive. I can’t say if the two guys were kidnappers or not, but before we knew what was happening, many people have gathered and started attacking the suspects They were attacking them with daggers, cutlasses, Stone, bottles, and other weapons.

” It was while they were attacking the victims that the police raced to the scene to rescue them and hell was let loose as the mob numbering over 1000 resisted the police and attacked them with everything at their disposal. The police made a retreat and called for reinforcement. But before the reinforcement could respond, one of them had been set ablaze. However, one of them was rescued but I doubt if he will survive as he received serious matchet cuts all over his body”.

” Our men at Elelere division received a distress call that suspected kidnappers were being mobbed at Mulero bus stop, by Omotoye Estate. Operatives moved in to discover that one suspect and a Golf car had been set ablaze, but we rescued one of them who has been matched severally by the mob numbering over 2000. In a bid to rescue him, the agitating mob attacked the policemen. He was eventually rescued and taken to the hospital where he is receiving treatment. The police have commenced an investigation and the State Commissioner of Police, Mr. Hakeem Odumosu, has condemned the act of jungle justice, describing it as inhuman”.

Soldier kills self, Customs officer over bag of rice

Killer of missing NSCDC officer used her for rituals